It came to my attention not but a few minutes ago that Ben Bernanke was back in Congressional hearings yesterday or today talking about the financial crisis. Now, it seems he is predicting that we continue to see unemployment rise through the end of the year and possibly through the "beginning" of next year. Of course, it is because of the Federal Reserve (according to Bernanke), that we've averted a "much more serious crisis".
[Insert Audience Laughter Here]


Now, I'm quite sure he's absolutely correct that unemployment will continue to rise through the end of the year. But as 2009 slides into its "middle", with 300,000+ new unemployed in May and the US Government & Federal Reserve continuing down an increasingly idiotic path of economic destruction, I'm also quite sure that come the end of the year will bring more unemployment & further worsening economic conditions. As the dollar starts to get seriously devalued and Government takes over an ever expanding chunk of the GDP, and restricts more aspects of economic & social activity, things aren't exactly looking up... Yet we're sure to enjoy more Bernanke predictions of how it's all just about over and surely everything is going to be ok in another 6 months or so. He's got such a great track record on these things, don't you know?

So what of Bernanke's earlier predictions anyway? Well. Why don't we take a look at a few!

“Ben S. Bernanke does not think the national housing boom is a bubble that is about to burst, he indicated to Congress last week, just a few days before President Bush nominated him to become the next chairman of the Federal Reserve.

U.S. house prices have risen by nearly 25 percent over the past two years, noted Bernanke, currently chairman of the president’s Council of Economic Advisers, in testimony to Congress’s Joint Economic Committee. But these increases, he said, ‘largely reflect strong economic fundamentals,’ such as strong growth in jobs, incomes and the number of new households.”

“My baseline outlook involves a period of sluggish growth, followed by a somewhat stronger pace of growth starting later this year as the effects of (Fed) and fiscal stimulus begin to be felt.”

-Testimony to the U.S. Senate Committee on Banking, Housing, and Urban Affairs on February 14, 2008


Aren't those great? Of course... As wrong as he was about all that, since the "meltdown", he's made even more ridiculous statements which have been localized to a few months at a time. Check out a few from this year from the AP on May 5th, 2009:

"Here’s a look at Bernanke’s recent comments on the economy:

Jan. 13 - "Fiscal policy can stimulate economic activity, but a sustained recovery will also require a comprehensive plan to stabilize the financial system and restore normal flows of credit," Bernanke said at the London School of Economics.

Feb. 24 - Bernanke said he hoped the recession will end this year, but that there were significant risks to that forecast. Any economic turnaround will hinge on the success of the Fed and the Obama administration in getting credit and financial markets to operate more normally again. "

March 3 - Testifying to the Senate Budget Committee on the bailout of American International Group Inc. ( AIG - news - people ), Bernanke didn't repeat remarks he had made a week earlier that the recession could end this year if the government succeeded in turning around wobbly financial markets.

March 10 - The recession was more severe than the Fed had expected, Bernanke acknowledged after a speech to the Council on Foreign Relations. Still, he added there's a "good chance" the recession could end this year if the government managed to get financial markets to operate more normally again.

March 15 - "We'll see the recession coming to an end probably this year," if the government succeeds in bolstering the banking system, Bernanke said in an interview with CBS ( CBS - news - people ) TV program "60 Minutes."

April 3 - He said he expects a "gradual resumption of sustainable economic growth." However, he didn't say when in remarks to a Fed conference in Charlotte, N.C.
Related Stories

April 14 - "Recently we have seen tentative signs that the sharp decline in economic activity may be slowing," Bernanke said in a speech at Morehouse College in Atlanta. "To be sure, we will not have a sustainable recovery without a stabilization of our financial system and credit markets."

May 5 - "We continue to expect economic activity to bottom out, then to turn up later this year," Bernanke told lawmakers, sounding more confident about the prospects for a recovery later in 2009.."

So how have his predictions stacked up? Not well. Take a look at the following graphic regarding unemployment in the US. 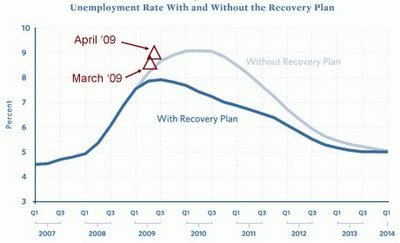 The above chart is a great snapshot of where we are right now, and clearly shows Ben Bernanke's rosy eyed optimism to be pure fantasy over the years, but Bernanke didn't produce the graph itself - it was Obama's team of economists who did that. Note that they laid out two possible estimates for unemployment, one with the "economic stimulus package" and one without. Naturally, the one without was much higher than the one with - they wanted to pass their recommended legislation after all (and of course it wouldn't be passed if it wasn't presented as a way to avoid a much more serious problem). But... Ooops! Not only are our current and ever increasing rates of unemployment across the US *higher* than their predictions with the stimulus, we've already exceeded their "worst-case-scenario" predictions without the stimulus...

Gosh, I'd say "I told you so" but at some point this is just depressing.


"So what", you might be thinking, "Obama & Bernanke and the entire crew out there maybe just underestimated the magnitude of the problems that were "left" to them by President Bush... It's too early to say that that the current policies of the Government & Federal Reserve have caused higher unemployment, right?"

Let's set aside the fact that everyone in Obama's economic team, to say nothing of Bernanke himself (who was already Federal Reserve Chairman in 2005), were around throughout the entirety of the Bush years... and the Clinton years... and the G.H.W. Bush years and the Ronald Reagan years too! And virtually all made call after ridiculously incorrect call time and time again... Yet here they still are, making bad predictions and recommending failed and foolish policy. In doing so, let's also set aside that these are exactly the people responsible for our current position, so Obama's people shouldn't be "surprised" by anything they've been "left" with on this economy. And while we're at it, let's leave out the entirety of the Austrian School of economists who correctly predict the coming events as well as who have offered a clear and logically consistent explanation why this all happened. Let's leave all that out and assume that Obama's people just misread the magnitude of the problem by a few million lost jobs and a few trillion dollars of lost nominal "value". If we make those concessions... then sure. Technically, it is still too early to say conclusively that it's Government action that's already prolonging the recession, and turning it into a depression... But... That's really only because the vast majority of the stimulus money hasn't made it on to the open market yet!

Stop and consider that for a second.

The vast majority of the money our Congress voted to approve so urgently that they couldn't even be bothered to read what they were voting on... WON'T EVEN BE SPENT FOR ANOTHER YEAR at the earliest!


Of course maybe that will make you think that then the stimulus could have worked (and maybe still will) if it was all spent immediately, infusing the wider economy with a huge injection of cash just when it "needed" it most. Now, that is still quite untrue for all of the fine reasons my Austrian economist pals have been saying forever, but the reality is, all economic theory aside, we have the stimulus as it is. We can't very well go back in time now and make it work faster and given the lightening speed at which it's taken hold already, I'm not sure it's even remotely possible to get it to "work" faster. But this means that whatever the Government/Fed's intentions were in boosting "aggregate demand", and whatever insane Keynesian "multiplier" they expected to get out of that, their "boost" can't even possibly work for at least 2-3 years, even if it was based on sound reasoning and historical experience... which it isn't.

In the meantime, unemployment skyrockets and "aggregate spending" decreases even further, so whatever their original predictions were, things will keep getting worse and worse and thus the predictions will be further and further away from reality - which in their minds surely will mean that next year, as things are much worse than they'd predicted or anticipated (purely because they're all morons apparently), they will need to "stimulate" even more! At any rate, once the stimulus spending does go into full, blazing effect, I will reconnect with the above graphic and compare to the new ones available and there will be no further doubt how exactly our Government & Federal Reserve have succeeded to turn something relatively unfortunate into a complete, unmitigated catastrophe. It may be technically too early to call right now, but give it a year.

Now, all that said, there is a much more insidious character to the fact that all this mad Government spending hasn't actually made it into the regular economy yet... What the time lag on the stimulus spending really means to us ordinary folks is that the coming hyper-inflation necessarily won't be noticeable or really "start" happening for a couple years yet. Unfortunately, that's going to lull an awful lot of people into a false sense of security and the belief that the "worst is over".

As inflation starts to set in and cost of everything rises, there is naturally a time lag between prices rising and wages rising and certainly history has shown that the faster the increase in inflation, the greater the gap between cost of living and wages can become. As that happens over the next 5-6 years, the real standard of living in America will continue to decrease significantly - and with it comes wonderful things like civil unrest, hunger and possibly increases in crime & violence.

And honestly this is barely scratching the surface... I'm not even mentioning the grotesque destruction of liberty that we will continue to experience as our Government tightens its grip on the economy, choking us all or the havok that all that will cause all on it's own, even without the economic disaster. Perhaps on the next installment I will explain how economic liberty & "social" liberty are merely two sides of the same coin, and how anyone who's cheering the tightening of Obama's grip on the "evil big businesses" is merely cheering their own imprisonment and poverty... But I think I've done enough for now. ;)