There is NO health care market in America

I've written extensively on this blog about health care over the last several years, and particularly when the debate over Obamacare was going strong in 2009-2010.

As that law has taken effect, we're starting to see some of the consequences already in the form of higher insurance premiums, more limited options in insurance plans, more expensive health care across the board and companies either obtaining politically granted waivers exempting them from the law or simply deciding to take the "penalty" and break the law instead of go out of business trying to pay for employee's health care costs.

I produced and released the following video yesterday, where economist, Steve Gohmann of the University of Louisville discusses the issue. Check it out now:

You may have noticed the following chart detailing how incredibly complex the system is in the video. I provide it here as well just so you can have a good look at it. The next time someone tells you about how we should have the state more involved in the health care... Just show them this: 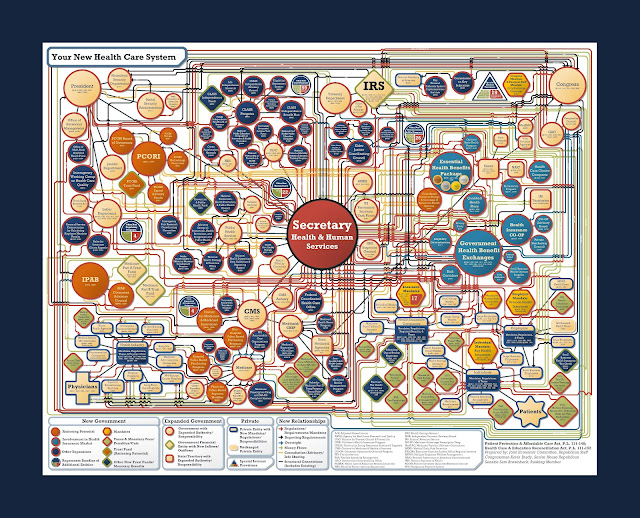 I didn't make this graphic... But it is advice I have given out many, many times, and I couldn't agree with it more. 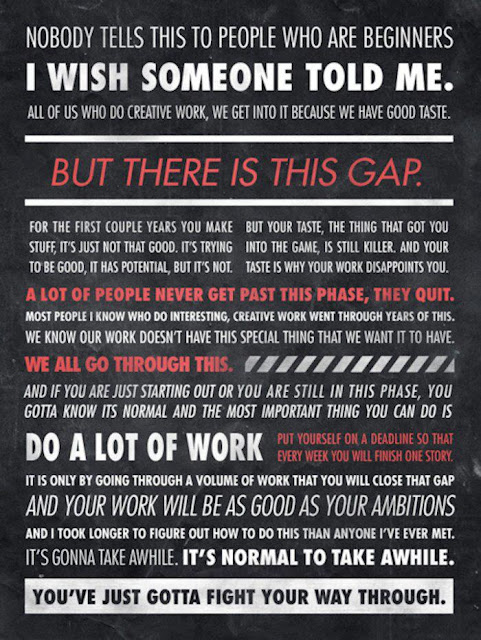 For some people, creativity is an elusive or magical process... but the truth is, the secret sauce is just time and emotional resilience.

I can honestly say - and I believe most of my artist friends would say this as well - that there is not a single thing I've ever made in my life that I have been perfectly happy with. I've never done anything creative that I look back on and think, "well, that couldn't be any better". I have hours and hours of recordings from bands and musical projects I've been in - a few hours solely of music I've written, even - and every one of them has flaws and shortcomings.

Everything I've written and produced, all the videos I've made, all the infographics, my attempts at animation... It all falls short of what's in my head.

I think this is true for nearly everyone if not absolutely everyone.

What makes an artist successful is that they push past their own creative failures and try again. And again... And again. The disconnect between what you "see" internally, and what comes out on the page, canvas, instrument, camera, etc., is what's usually the disappointment You'll be annoyed that the thing you wanted to make isn't the thing that you made, and in the early stages, you won't know enough about what you're doing to know how to fix what's wrong with it - and sometimes you won't even be able to express to anyone else what you meant to do. As the graphic above says, a lot of people never get past the phase of having their work disappoint them, and they quit.

The biggest trick of it is just not to quit.

That's why the best thing you can do is just... create. And create a LOT.

The more you create - in any medium - not only will you improve your technical skills in that medium, your taste will be refined and your artistic sensibilities will be sharpened.

You'll start to be able to anticipate problems and correct for them before they become problems. You'll eventually be able to articulate the things you like and dislike aesthetically in very specific ways - and once you can do that, then you can start making choices with your own art, rather than creating purely by trial and error. And once you can do that, then you will find that the art you make is far closer to what's in your head and your heart than it is when you start - and you will have moved beyond the phase where you experience that constant disappointment.

Then, you get to move from anticipating and correcting "mistakes", to honing in on what you really love aesthetically & creatively.

I have an uncle who was a professional, and literally "international award-winning", chef for many years until he switched careers in the 90s. He used to have a home kitchen which he had remodeled himself. On the floor was painted a timeline of his own work and experiences. The timeline started at the garbage can, and on the floor next to it, he had painted the words, "This is shit."

Nobody ever sees the "shit" (if we're lucky) as artists. So people who aren't artists tend to think that it's all just pure talent or alchemy. There's something mysterious about it because the amount of time it takes to get really good at art is the same as the amount of time it takes to get good at anything else, but nobody in their right minds spends that kind of time on learning how to draw or paint, or sculpt, or make movies and music.

It's not magic, though. It's just putting in the work, and caring about making it better.
Posted by Sean W. Malone at Tuesday, April 24, 2012 1 comment: Links to this post

Thinking about a new band... Thoughts?

Here's the gist of a ridiculous post I'm about to put up on the Washington, DC metro area Craigslist:

I'm fairly new to the city, and don't know the scene that well, but I want to put together a new band. Here's the thing though... I have a bunch of things that I'd really like to do and because I don't know the scene here that well yet, I'd like to gauge people's skills & reactions. I'll tell you a little about myself and then if you're interested, read on. 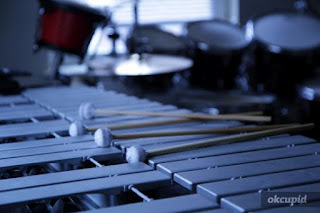 About me: I work professionally as a video/media producer and a composer, and I have two music degrees - both in composition - from good schools. I haven't played regularly in a proper band in a couple years, so I will openly admit that I am out of practice. However, I did work professionally as a performer for several years in the midwest, as well as New York City, Los Angeles, and Portland, Oregon. I'm a trained percussionist, but primarily a jazz/pop vibraphone player and a drummer. I started playing in local punk & ska bands in High School, but I've played/run pop groups, funk bands and most notably, jazz quartets, and while living in Los Angeles, I spent a year coaching and managing show bands, pop-cover bands and other acts working on cruise ships around the world. I then worked in LA as a music editor and mixing engineer for a music software company.

So... I am, and have been, a professional musician for a while, so I hope that those who respond to this post are people who are comparably serious about music. However, here's where I'm going to lose all the good players in DC...

I'm not a career performer, and I've got no aspirations of getting a record deal or spending my life on stage. I want to create a band that is very good, but also one that is mostly for fun. Ideally we'd be seeking paid gigs, of course, but I'm nearly 30 and am building a good career making films and scoring them, so I've got no interest in doing 9 months of the year on the road. But I do want to play some music as well, but I don't want it to be some amateur hour garage band and I have a few different concepts that I'd like to get people's feedback on. So here's what I'm thinking about:


SO... DC Craigslist Musician Community!! Help me out here :)

Do you guys have any interest in these kinds of projects? Can the scene support a couple gigs a month for bands like the ones I am describing? Which seems the most intriguing? Would any professional caliber musicians be interested in getting together some Saturday or Sunday afternoon and renting out a rehearsal space and putting in a little sweat equity to get some gigs? This will be mostly for fun, but it could also be good.

If this helps, another upside is... again, I'm a professional media producer (which also includes photography) and I'm pretty competent with music post-production/recording (and know some incredibly talented LA-based composers & mastering engineers, etc.), so there is a potential of doing some higher quality recordings some of the material if it's good.

What say you all?

What say you all?

Anyone within my Facebook network who are locals have some heretofore underutilized music performance skills they'd like to come out of the closet about? My goal here is just to spend a few days a month doing this once it's something that I know can be good.