I'm not normally one to jump into the internecine squabbles of seventh tier embarrassments like this, but I recently revived an older video of mine and it was immediately the subject of a lengthy diatribe by the libertarian "movement's" resident charity case, Christopher Cantwell. If you don't know who he is, well... That's not terribly surprising, and also, you're a luckier person than I.

Anyway, the video in question was a crowd favorite from The Libertarienne Show called "How Not To Talk About Liberty".

Impressively, Cantwell's screed got just about everything humanly possible wrong about the video and the intent behind it. And what's always fun for me... He attributed it wholesale to the ladies on-screen, and didn't even realize that I wrote and produced it. Pro-tip: Most of the time, there are people behind the camera who actually do most of the work. Just sayin'.

For some reason, I decided to respond at length in the comments of his blog post, but shockingly, he seems to have refused to publish my remarks.

I already shared them with friends on Facebook for a bit of a laugh, but I figured I'd better record them here for posterity's sake. It also includes my first-ever public explanation of why I essentially shut down The Libertarienne Show YouTube channel, so that might be note-worthy as well.

Without further adieu, I bring you...


My reply to Mr. Cantwell

First... You should know that while both Marianne and Cathy contributed some funny ideas, they did not write or produce the "How Not To Talk To People About Liberty" video.

Secondly... You should know that I'm unequivocally not a left-libertarian, and in no way is this video about "left-libertarianism" or "social justice". For those who don't know me, see the following for more on what I believe in that regard: Thick... Thin... Or Just LibertarianismPLUS?

You are mistaken regarding the purpose of the video.

It is about how so many libertarians - yourself very much included, and more than I could possibly count - often fail to adequately communicate libertarian ideas to non-libertarians who do not already share in a preconceived understanding of what the philosophy is, or even what "liberty" itself actually means as a concept. It is a hopefully comedic effort to talk about the *presentation* of libertarian ideas, not to be confused with the baggage of left-libertarianism that you presume the video to include.

Thirdly, I suppose you might be interested to know that the video "disappeared" for a while because I made it and everything else Cathy Reisenwitz is in on that YouTube channel private.

I did this rather intentionally for reasons you might even appreciate. You see, at the time, I took the video down because Cathy had suddenly and disruptively quit our show to pursue a path that I actually found to be abhorrent in many ways. Ironically perhaps, she essentially became your equal opposite extreme and I did not want to lend any support to that career.

I had since been asked numerous times by many fans what happened to this video, and for a long time I would simply tell them the truth: That I had taken it down so as to not give Cathy any added support. But recently, when Marianne Copenhaver asked me as a personal favor, I decided to revive it from the "dustbin of history" in which you seem to prefer it would have remained.

Incidentally, part of my decision to revive it was made on the basis that Cathy (whom I have not spoken with in over a year and a half) seems to have dropped out of "public life" as an activist and public speaker in libertarian circles.

All that said... This video was written and conceived as a way to joke about the numerous ways in which libertarians are completely tone-deaf in their attempts to spread the ideas they hold most dear. Both "left" and "right" are offenders, and I don't consider myself part of either group.

It would be difficult to boil down my decade of experience working in commercial entertainment and now non-profit advocacy film production, the perspective I gained through studying music and film-making in college and graduate school, or to share all the lessons I've learned as a successful producer of libertarian media content... But I can say with certainty that the one thing most libertarian advocates seem to be utterly incapable of doing is understanding how to effectively read a room.

When many, if not most, people in America are generally afraid of guns, and think of people who open-carry at rallies and wave guns around in public as dangerous nutjobs, it's not the best strategy to build your hopes of influencing people toward a libertarian stance on gun rights by putting those people on the poster. Instead, as a suggestion, you might find more success promoting heroic human interest stories about the ways in which guns have been used to defend people against criminals - and by "criminals", I don't mean meter maids, just so we're clear.

Likewise, most people in America really aren't that into polygamy or polyamory, they're uncomfortable with the kind of libertine social culture a lot of "left" libertarians promote, and basically no one likes to be called racists, bigots, sexists or anything else deliberately inflammatory toward their motives. So building an outreach strategy around those kinds of statements is also virtually guaranteed to fail.

And believe me, I also warned Cathy that the path she chose was a poor one for a reason, and not just because I find most of the collectivist bullshit and resistance to intellectual challenge she wanted to import from leftist feminism to be ludicrous, but because it was guaranteed to be divisive and create more enemies than friends.

What's sad to me is that neither you nor Cathy seem to have properly grasped the lessons jokingly written into the video you're criticizing, and perhaps neither of you understand why it's apparently amusing for the fifty thousand or so viewers who watched it within a month or so of its creation.

In no way is the point to endorse "statism", though thank you very much for so aptly demonstrating part of the video's point.

No... It is to make light of the fact that so many libertarians (like yourself) don't realize that the only way to wind up with a more libertarian world in *reality* is to win hearts and minds, and that to do that, you can't yell at people like a raving lunatic, oblivious to their concerns. instead, you have to essentially do the opposite. You have to listen to others, find out what matters most to *them*, and present your case in a way that appeals to the values they hold most dear.

This really is basic, Dale Carnegie 101 stuff, after all... And the fact that you don't understand this point is precisely why you ended up (fortunately only briefly) as the laughingstock of America on the Colbert Report. You didn't win any friends for libertarianism with that... But you did make a lot of people think we're all idiotic assholes. 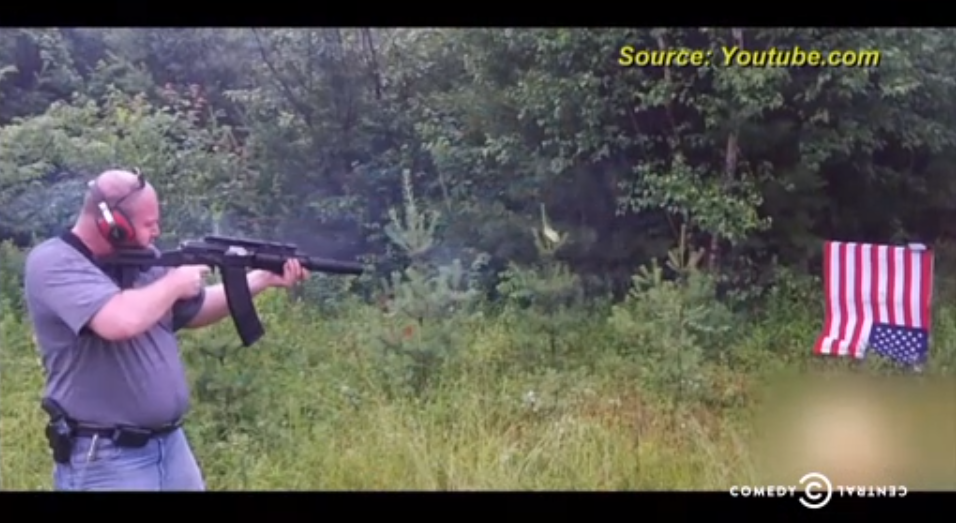 You gave ammunition to one of the most influential shows in America to paint libertarians as, in Stephen Colbert's words, "Shitstains" and "huge douchebags." It's that kind of completely out-of-touch outreach "strategy" - if you could break the meaning of that word beyond all repair - that sets our ideas back in the minds of other Americans and moves us farther and farther away from the goal of a more free society for everyone.

So thanks for that.