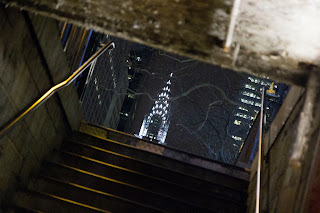 Since Monday, I've been in New York City, filming an insane number of interviews (25) for a new documentary project I'm producing on the story of Hector Ricketts and the much put-upon commuter van industry in the outer boroughs.

I've had an incredible time here, not only because everybody I've met and interacted with for the project has been amazingly generous, kind and interesting... and not only because to date, I'm actually shockingly happy with the overall quality of audio & video I've managed to capture here and will be starting the editing process in the next week with about 16 hours worth of actually very good raw footage... but also because along the way I've been able to have a few uniquely New York experiences - like randomly meeting a musical idol of mine while at the Birdland jazz club in midtown on Monday evening, and like seeing a truly bizarre "noise" music trio in the East Village tonight.

Tonight was my last night in New York City, and I won't miss the freezing temperatures, the cramped quarters, the generally pitiful excuse for "grocery stores" and modern amenities, or the hectic schedule I've kept... nor, to be honest, will I miss the fact that Jamaica is so ridiculously far away from Manhattan. But I will miss the same aspects I missed when I moved out of this city after graduate school, 5 and a half years ago.

I'll miss the vibrant diversity of socio-economic and ethnic identities. I will the great miss the music found everywhere in the city. I will miss the uniqueness of this place.

Unfortunately... This post isn't actually about any of that.

Instead, this post is about a young woman - perhaps not over 25 - who I encountered on the E train out to Jamaica, Queens tonight just a couple hours ago. She was sitting on one side of the subway car, and no one was sitting anywhere near her.

When I walked on the train at the 53rd and Lexington Avenue stop and sat down across from her, an older gentleman tried to sit down next to her, and she started shoving some papers under where he intended to sit, cautioning him to "watch out for all the snow!". He was confused, and - like most of us at 1:00 in the morning - obviously rather tired. He didn't push the issue, however. Somewhat grumpily, he continued to stand until a seat opened up at the next stop.

She also muttered something about how "now they have the cameras for me...", clearly responding to the camera I had strapped around my neck.

You see, my assistant Dylan and I had spent the whole day shooting b-roll for the documentary in the city, and I never went back to the hotel before meeting my dear friend Jessica Willis (who saved my sanity at a very tough point in my own life a couple years ago) at a Korean restaurant and attending this strange music show in the East Village.

So I carried my camera around, and this young woman obviously noticed it. Her response was to cover her face with her coat.

During the course of my very long train-ride, she would also periodically lean way over and touch the floor of the train with her first fingers, while muttering to herself under her breath, and then she would make gestures with her right hand - which I noticed had a wristband on it that was of the type usually given to patients at hospitals.

Her clothes were unclean and did not fit her, she wore no bra and she was swimming in her loose shirt. Her jacket was red, and her hair was almost as short as mine.

Without rushing to judgments, I would assume she was both homeless and emotionally or mentally disturbed in some way or another... and for most of the train ride, I was prepared - as New Yorkers often are - to simply go about my business ignoring her and then get off the train when we arrived at my stop.

But then something interesting happened.

She looked at me and asked me for a business card. I must have looked puzzled, so she asked if she could have my phone number. She then began to rummage through the large garbage back filled with what appeared to be miscellaneous garbage - papers, wrappers, plastic or styrofoam cups and the like - for something to write on.

I didn't really know what to say, but it seemed silly to me to watch her go through this trash to find something to write my phone number on, and for a brief moment I debated giving her a fake number or trying to find some other way to reject her request. But for whatever reason, I chose instead to reach into my pocket and hand her one of my cards.

She took it and thanked me kindly.

She then read it and again pulled her coat up over her head. While she did this, I somewhat quietly turned my camera back on and snapped a single picture of her. 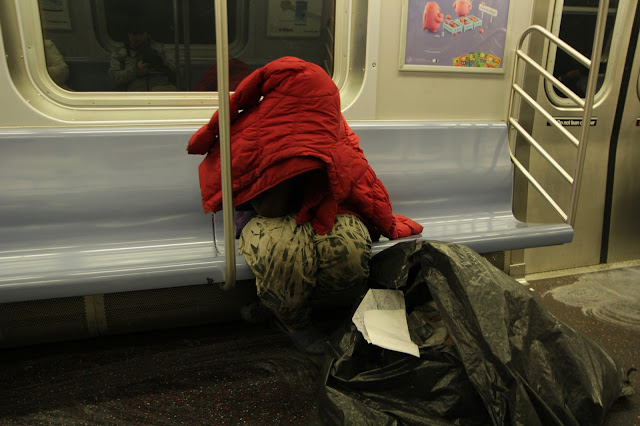 As we got nearer to the stop I needed to transfer to the final stage of my commute out to Jamaica, she looked up at me again and said, "Thank you, Mr. Malone."

As I stood up to exit the train, she stood up too and held out her hand. I took it. It was dry and a bit coarse, but she was lucid and her eyes met mine directly.

She thanked me again, and asked me where I had gotten my camera. Again, I wasn't certain what she really wanted the information for, and I believe after removing my ear-muffs, I answered, "B&H photo, I think...". Offhand, I couldn't really remember. I was carrying my Canon T2i, which I bought over two years ago.

As I left the train, she said she would call me.

While the doors shut behind me, I stood on the same platform waiting for the F-train, and as the E-train I had been on pulled out of the station, she waved at me politely and smiled to me through the window.

I do not know her name.

In all likelihood, my business card will be lost in among all the other papers in her garbage sack... and then, quite possibly some social worker or police officer will - "for her own good" - throw out the bag entirely. And beyond that, of course, what phone could she use to call me, and what would she say?

But... What could I possibly even say in response to her if she ever does?
Posted by Sean W. Malone at Saturday, January 26, 2013 No comments:

I wrote this in a little moleskin notebook a few years ago. I found it tonight.

John looked up from his drink for the first time in what felt like days. Lost in contemplation, it was the strangeness of Tom Waits that broke his unintentional concentration.

"Oh well," John thought. It wasn't as if he had had a single concrete thought in hours.

Looking up at the time, John realized he was late. He didn't care anyway. It didn't matter anymore. She was gone.

After tossing a few bucks at his drink, he grabbed his jacket and stepped outside. As the door of the bar closed with a dull thud, John realized how cold it was. A little bit too cold, actually.

Nothing to be done though, so John pulled his zipper up to his neck and shoved his hands in his pockets. The fine brown leather of his collar rubbed against his chin with each step he took, the chilling air nipping at his exposed skin.

The city didn't seem to notice.

It was Saturday, and the club girls waiting in lines wore miniskirts and sparkling, desperately thin, tops.

As John pushed his way through the crowds, he couldn't help but laugh at the way the girls stood next to each other, each shivering like a wet Bichon Frisé. The boys didn't offer their jackets either.

As John thought about the end of chivalry, he stumbled.

The mob of careless, drunken fools was beginning to get intolerable. John had to get away from the crowd.

Perhaps a side street would get him there faster.

What do you think?

To be honest, I can't remember what I was feeling when I wrote it. But now I find it interesting... and anomalous, since I so rarely write pure fiction of any kind.