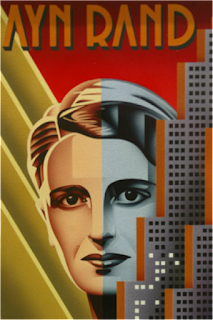 As happened just a bit ago today, I am told constantly by liberals, socialists and other generally anti-market types, that free market icon Ayn Rand accepted Social Security money and Medicare payments in her old age.

They usually say this to me as if they're breaking earth-shattering news to me (they're not), and as to imply that I should be appalled, devastated and personally offended (I'm not).

Usually this fact is seen as some evidence of both the benevolence of the state, which provided for a sick old lady who - had she gotten her way - would have died in the street otherwise; and as evidence of Ayn Rand herself being a stupid hypocrite who should obviously be dismissed entirely as a thinker.

It is, of course, evidence of neither.

Once and for all, let's think through the logic on both points, shall we?


"That's the failure here;  Rand needed society's help.  Rand ran headlong into the very premise of why Medicare was created in the first place:  The for-profit insurance market is very very bad to the elderly and particularly to those already stricken with serious diseases like cancer.

Naturally, Rand showed no signs of rethinking anything in the face of her own personal failure to survive in the world she would see created.  If prominent intellectuals sitting on piles of royalties for perpetually successful books can't survive unaided by Big Government in Randland, who can?"

But really, this is a silly argument. And here's why:

Ayn Rand made a ton of money from direct sales and the royalties from her books & screenplays, and I'm assuming she had enough money to take care of herself without the payments. This is a bit 3rd hand, but the blog quoted above estimated Rand's net worth to have been $500,000 when she died in 1982. That'd be about $1,171,000 today.

It's pretty easy to argue - contrary to that blogger and others - that private insurance and her savings alone would have been more than enough to pay for her cancer treatments without "aid" from the state. So I don't even think Ayn Rand "needed" the state in this case at all.

2. Medical and insurance costs are highly inflated thanks to the state.

I've gone through this point in extreme detail in multiple previous blog-posts, but the basic argument is this... As a consequence of restricted quotas on medical licensing, to the high cost of drug approval, to special taxes on medical devices & technology, to insurance mandates, restrictions on national and international markets in health care, direct subsidies and payments from the state for about 50% of all health care services and a dozen other highly significant policies - health care in the United States is vastly more expensive than it needs to be.

Additionally, because there is no functioning price system in American health care, the incentives to increase supply or get serious about prioritizing the highest valued uses of medical care in consumption are all screwed up.

So.... If Rand had actually gotten her way, arguably health care itself would be far more affordable than it is today - further widening the gap between the Medicare/Social Security payments Rand received and what she actually "needed" to live out the rest of her life.

MORE importantly, this would mean health care was cheaper for everyone. Not just for comparatively well-to-do writers.

...and that is precisely what most statists don't understand about this stuff. The state has created conditions that make health care (and everything else) a lot more expensive than it would otherwise be, and this inflates the cost of living for everyone - sometimes out of the realm of affordability for a lot of people.

In the immortal words of Harry Browne:


"Government is good at one thing: It knows how to break your legs, hand you a crutch, and say, 'See, if it weren’t for the government, you wouldn’t be able to walk.'"

Even if she was doing ok, financially, Rand's standard of living is depressed as a result of these kinds of things just like everyone else. But there's even more to this story...

In truth, it's not really the idea that Ayn Rand "needed" Social Security and Medicare payments in her old age that people really care about.

The real thing people gloat about is the supposed "hypocrisy" of it all. And on the surface, I suppose it seems legitimate. I mean... Woman who rails against the welfare state accepts benefits from the welfare state in her old age?

Rand was primarily opposed to any system in which money was taken by force from a dispersed group of people to pay for programs that benefit only a few. Yet, she spent her entire life paying taxes, even though she did not believe in the overwhelming majority of programs the taxes are used to pay for. Money was taken from her by force for purposes she would not have deemed moral.

Later in life, she reclaimed some of her previously-stolen money.

Basically, I'd consider Rand accepting Social Security and Medicare payments to be a lot more like her own version of the actions of her character Ragnar Danneskjold from Atlas Shrugged than anything else... Albeit with much less exciting swashbuckling.

Ragnar, for the multitudes of liberals who know nothing of Rand's actual writings, was a philosopher-turned-pirate who attacked government vessels carrying gold. Ragnar would then steal exactly the amount of gold illegitimately taxed away from people living in Galt's Gulch and then return it to them. To quote Ayn Rand's Ragnar himself:


"What I actually am, Mr. Rearden, is a policeman. It is a policeman's duty to protect men from criminals – criminals being those who seize wealth by force. ... But when robbery becomes the purpose of the law...then it is an outlaw who has to become a policeman."

The point is this: It's not at all hypocritical to reclaim the money that was stolen from you in the first place when your whole philosophy argues that it's immoral to steal.

If you advocate a world with no theft - notably including theft by the state in the form of taxation - then anything that reunites property with its rightful owners is fine. In a world where the state is engaging in legalized plunder (to paraphrase Bastiat), then it's morally right to get as much of your stolen money back as you can.

And there's virtually no chance Rand got back any more from the Social Security or Medicare system than she put in over her 77 years of living.

So in reality, I'd call Ayn Rand a hypocrite if she did not try to get as much of her own money back from the government as she could - especially when the overwhelming majority of it is put to uses she'd find totally abhorrent.

To say that she should not have done this on the grounds that it was "hypocritical" as so many liberals claim, while not also making the simultaneous claim that she should not have been taxed in the first place, is to say that people should be forced to give the government tons of money for reasons they disagree with and would not support, and yet also have utterly no hope of ever seeing it returned to them.

What a horrific argument!

People have their resources taxed away from them every single day and mostly for purposes that only beneficial to politicians and concentrated special interest groups. Getting some of that money back at the end of people's lives is a weak consolation prize for accepting lower standards of living for a lifetime and a political class and their cronies run wild.

Because the fact of her taking Social Security and Medicare payments has lead to me having dozens of discussions every year about the things I've just gone out of my way to explain and discuss. She gave liberals ammunition to dismiss her over-all political views and to distract from the areas of her life and philosophy that are actually worth criticizing (and there are several of those).

I wish she hadn't done it, purely because of the stupidity of the arguments that her actions have created.
Posted by Sean W. Malone at Monday, May 27, 2013 1 comment: Links to this post

"Socialism Forever": 'Conversations' with an Anarcho-Communist/Syndicalist

Was talking to Facebook friend Anthony about private roads, after he shared a stupid meme insinuating "tea partiers" caused budget cuts which then caused the recent Washington bridge-collapse.

And then... Basically out of the blue, this happened.

What you're about to read is not really a "conversation", but we'll call it that for the sake of the blog post. I haven't engaged people in this way in a very long time online (mostly because I'm just too damn busy and it's not worth my limited time to do), but I will say this... it's pretty representative of every other time I've unearthed a communist on the internet.

The following is the uncut exchange beginning with the very first comment Mimi wrote through the last thing she said after I decided to leave the conversation. I've altered nothing, and I can assure you there was no baiting in my previous posts.


Now.... I should have probably completely stopped interacting earlier, but honestly, I'm intrigued by the existence of people like this.

You'll notice that there's absolutely no intellectual humility, no desire or willingness to discuss or engage on ideas, there's a focus only on labels over substance, inventing litmus tests and bare assertions of authority in Mimi's posts...  All while her actual arguments are nothing but crass ad hominems and strawmen.

At no point does she seem to genuinely want to know what I actually think - or why - and instead, she's perfectly happy to call me an "Ayn Randian Right wing libertarian piece of shit".

Now... She's not interested in telling me why I'm wrong, either. All she does is tell me that I am wrong, and that I am obviously a "brainwashed lemming", a "foxnews fool", and - my favorite common refrain from people who can't defend their positions with reason or evidence - just a "media producer" who couldn't possibly know anything about anything. Then there's the bizarre dragging of Ayn Rand (who I did not mention one time) and her acceptance of social security and medicare into the discussion, even though that had nothing to do with anything.

In truth, sometimes I find myself lowering myself to the level of these people (although I rarely ever initiate this kind of tone), but mostly I find this to be really amusing. A woman who claims to have a "finance degree and a postgrad in public policy" cannot have a remotely rational discussion about economics and public policy.

Is it sad? Embarrassing? Maybe it's just predictable...

I don't know anymore, and although I hate to say it, this the whole thing is exceptionally common in my discussions with socialists and communists and has been for years.

I really don't know how they manage to make it through academic programs in public policy or finance or anything else. It seriously just makes me suspect that the majority of academic programs are simply echo-chambers utterly devoid of emphasis on critical thinking and formal (or even informal) logic.

For years I spent a lot of time debating with people about these kinds of things. I've mostly stopped doing that at this point in my life, because of experiences like this.
Posted by Sean W. Malone at Monday, May 27, 2013 3 comments: Links to this post