I'm looking at old articles on people's support for government stimulus in the wake of the "Great Recession" back in 2007 or 2008.


"I had a hunch that the Obama people might be thinking too small on stimulus. Now I have more than a hunch – I’ve heard an unreliable rumor!"

So, what's 'too small' look like? Conveniently, Krugman lays it out clearly:


"So what kinds of numbers are we talking about? GDP next year will be about $15 trillion, so 1% of GDP is $150 billion. The natural rate of unemployment is, say, 5% — maybe lower. Given Okun’s law, every excess point of unemployment above 5 means a 2% output gap.

So we need a fiscal stimulus big enough to close a 7% output gap. Remember, if the stimulus is too big, it does much less harm than if it’s too small. What’s the multiplier? Better, we hope, than on the early-2008 package. But you’d be hard pressed to argue for an overall multiplier as high as 2.

When I put all this together, I conclude that the stimulus package should be at least 4% of GDP, or $600 billion.

That’s twice what the unreliable rumor says. So if there’s any truth to the rumor, my advice to the powers that be (or more accurately will be in a couple of months) is to think hard – you really, really don’t want to lowball this."

The rumor he heard was wrong, and we got an $819 billion stimulus package a couple months later - of which the CBO acknowledged $637 billion was direct spending by the Federal government. It also approved a ton of future spending, as well.

But hey! It's great that Krugman warned us about "lowballing" the stimulus, cause as we all know, that stimulus totally fixed everything, and we're all better now.

I know it seems awful for most people to think about, but scarcity is real, and especially in natural disasters, a free price system matters.

You might have read recent news reports about Hurricane Sandy disrupting supplies to people in New York and New Jersey. Some reporters are claiming cases of "price gouging". For example, the New Jersey Star-Ledger reports:


"Bumper-to-bumper cars, trucks and SUVs stretched from the New Jersey Turnpike rest areas, taking up right lanes for up to a quarter of a mile.

Where open and functioning gas stations could be found, people waited up to two hours for a share of those precious gallons.

In some cases, they might have been paying more than they should have, and reports of $5-a-gallon gasoline have reached state officials, who are investigating dozens of allegations of unlawful price gouging."

But consider that "price gouging" is a reflection of increased demand/limited supply of - in this case - a crucial good that in some cases can mean life-or-death for people who want to get it. 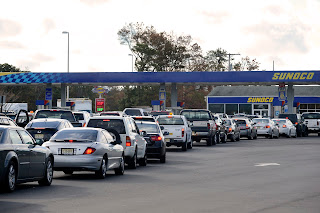 Politicians and the public at large need to stop their polemic moralizing for a moment and ask themselves what the alternatives are. On the one hand, we have the anti-"price gouging" position where politicians pass laws against any price-increases during natural disasters, and people get outraged if anyone raises the price of gasoline. But that doesn't change the fact that there is a far lower supply of gasoline than anyone would need to meet the emergency demand.

So... Under an anti-"price gouging" regime, who gets the gasoline? Answer: Whoever gets to the gas station first.

Is this really the best possible allocation of scarce & vital resources?

I'd say no. Not even close.

Those who get there first are not necessarily going to be those who value or need the gasoline the most. Hypothetically, what if you were responsible for an orphanage, and you had 30 children to account for and protect in the aftermath of a natural disaster that destroyed your facility? Surely you would attend to their immediate needs first and for as long as it took to secure the safety of the kids, right? Eventually, you'll need to go get some gas to power a generator, or to fill up the tank in a bus or a van so you can get the kids out of town.

But... While you were doing that, imagine that I - who have no child-saving responsibilities, and who has only experienced a power outage, but no flooding or real damage to my home - decide that I'd like to get out of the city. I hop over to the gas station long before you have even have a chance to do a headcount.

By the time you get there, there's nothing left. Your children are stuck with no power, no way of fueling a car or a generator and no place to live.

What if you let prices rise? What is the likely result?

Well, to be sure, I might be rich enough to decide to suck up the higher prices and buy the gas anyway and get out of town. But, more likely I'm not, and I decide to go back home, grab a blanket and read a book until the power comes back on - leaving more fuel for people who need it more - possibly people like you.

"Price gouging" is something that I suspect is shocking to a lot of people, because they think that only the rich people will get goods & services during natural disasters... But that's not really the issue. The resources will go to those who place the most value on them - and maybe those people are rich, but we could also easily be takling about groups of people like churches & charities who might have vans that would transport many poor people to safety and have pooled monetary resources and who maintain emergency funds.

Anyone who actually had the greatest need and placed the highest value on gasoline would be getting it, and more importantly - the high prices would encourage entrepreneurs from all over the place to come in and bring new resources into the affected area.

Don't believe me? Check out this film I made about the recovery in the after math of the 2011 tornado in Joplin, Missouri that nearly destroyed the entire town:

Allowing prices to shift and rise in response to crisis situations is a crucial way to get goods & services to those people who actually need them the most, and to encourage the import of new resources & labor into disaster-stricken areas. This isn't a new lesson from economics, but it's one that people keep refusing to understand...

The longer we put off recognizing these kinds of lessons, the more people will continue to suffer.
Posted by Sean W. Malone at Thursday, November 01, 2012 No comments: Links to this post