So, last week, my employer - The Charles Koch Institute - started running this video as an "advertisement" just in the Wichita, KS area. Take literally one minute and watch it:


This 60-second spot is a cut-down version of a video that CKI had produced a couple years ago (slightly before my time), which you can check out on YouTube. Embedding has been disabled on it, but you can watch it by clicking here: http://youtu.be/v1U1Jzdghjk

A few days ago, my dad - knowing that I've been working on a film that I've been trying to get released for quite a while - asked me if this was it (it's not), and forwarded me a fairly critical Huffington Post story about the video which basically just conveyed language & ideas taken straight from a predictably negative Think Progress blog on the video/Wichita campaign.

Setting aside for a moment the lazy journalism involved in basically copying & pasting an ideological blog and passing it off as reporting, the content of the HuffPo article itself is just absurd.

I'm in the process of moving right now and I hadn't had time to read or formulate a more comprehensive response to my dad's email yet, but as Think Progress continues to hammer away at CKI for the video, I figured maybe I'll just write this up here instead.

Before I begin, please note that these are my thoughts only, and are not endorsed by CKI nor are they meant to publicly or officially represent the organization in any capacity what-so-ever. I do not speak for the Institute, only for myself.

That said... The Think Progress/Huffington Post piece is riddled with economic falsehoods, obfuscation & misdirection, and outright logical fallacies and deserves a closer look.

In an article originally titled: "Koch Brothers Commercial Claims..." but which is now more accurately titled; "Charles Koch Foundation: An Income Of $34,000 Puts You In The Wealthiest 1 Percent", here's what David Winograd of HuffPo had to say:


If you earn $34,000, that puts you in the wealthiest 1 percent of the world, according to the Charles Koch Foundation.

That's one of many assertions made in a new ad that attempts to undermine government policies that protect low- and middle-income Americans. You can watch the ad, which is produced by Koch's conservative non-profit group, here: [VIDEO you saw above]

Of course, earning $34,000 in the U.S. won't get you very far in most parts of the country. The Economic Policy Institute estimates that a family of three needs an income of at least $44,617 a year to cover basic living expenses in the cheapest parts of the country. In Wichita, Kansas, where the commercial is currently being aired, according to Think Progress, a family of three would need to make $53,721 to get by. That's far more than $30,000 a year that two parents earning minimum wage would make.

Minimum wage is one policy that billionaire Charles Koch would like to see eliminated. In a recent interview with the Wichita Eagle, Charles Koch described the federal minimum wage as one of the policies that “creating a culture of dependency” and added that it “reduces the mobility of labor.”

Not a lot of words, but I guess that makes it a bit easier on this side.

First off, let's start with the easy stuff... "The Koch Brothers" didn't produce or pay for this video at all. Charles Koch did through the Charles Koch Foundation.

That's not to say David Koch probably doesn't agree with its contents, but they aren't conjoined twins! I've been here for 2 years and David has had exactly nothing to do with my day-to-day activities. Never met him, never heard him speak, he's never been in the office, his name isn't on the door... It may not matter to most people, but it's just sloppy reporting and it's an easy thing to get right unless your goal is to use language to heighten the nefariousness of the activity by insinuating a conspiracy among a unified pair of evil billionaires.

Speaking of evil billionaires, the Huffington Post recommended some other content for me to check out after I finished reading the article. How thoughtful of them!

I guess they figured I'd enjoy this slideshow: 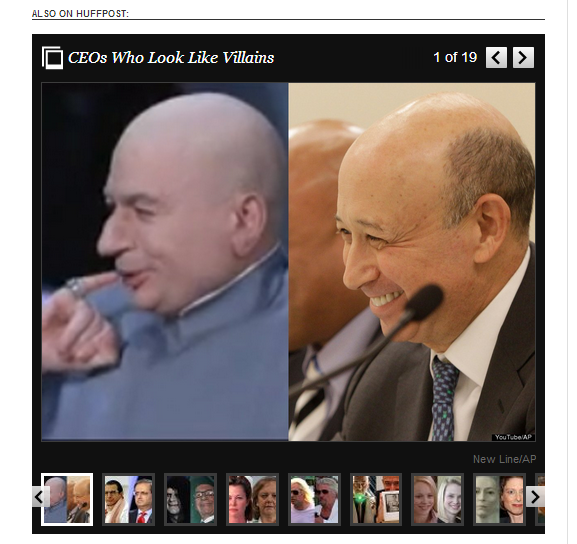 The appearance of this specific slideshow on a post about Charles Koch's non-profit activities is just coincidental, of course. Nor does it have any effect on the way readers look at the central topic of the article. Nooooooooope... Not at all...

Anyway, the headline has been changed, so at least that pet peeve isn't as much of an issue anymore, and yet even so, the very first sentence is shoddy journalism.

Well... Cause the $34,000 figure isn't "according to the Charles Koch Foundation", it's according to economists at the World Bank. Highly comparable figures are also confirmed by any number of other global research organizations that study this kind of stuff.

I'm sure it would surprise few people to learn that I'm friends with many of the economists who probably contributed to the data in the original video that got repurposed for the Wichita ad, and in my experience they all strongly prefer to base their conclusions off of data-sets produced by entities like World Bank, IMF, St. Louis Federal Reserve, and other widely-respected and generally "neutral" sources - or data-sets produced by partisan "progressive" outfits like - ironically enough - the Economic Policy Institute or Center for American Progress.

Don't believe me? Here are a bunch of other articles referencing the fact that $34,000 per year puts you in the 1% wealthiest population in the world.
So... While the HuffPo article certainly makes it seem like this is a poorly sourced claim made up out of the blue by dastardly partisans looking to manipulate you, the truth is that it's a widely accepted figure created by a well-respected organization and which was reported by plenty of major news outlets. It was not merely "asserted", as the article claims.

In fact... None of the information we used in the rest of the video (or the longer original from which it was cut) came from any particularly biased sources or is otherwise indefensible.

It's also unarguably true that real world evidence all strongly correlates economic freedom (i.e. property rights, mostly uninhibited freedom to buy/sell/trade, stable currency, low taxes, etc.), to higher incomes per capita, higher standards of living, and everything else we tend to think is pretty good. Economic freedom rankings are produced by the Fraser Institute in Canada, which is one of only two organizations I'm even aware of which even attempts to compare economic freedom internationally, and they're by far the best. All their data is publicly available and the way they do the rankings is based on a pretty clear formula, so it's not even all that subjective.

And here's the thing... Nothing the reporter quoted from Think Progress actually refutes any of that!

They just say - and I wouldn't disagree - that American families have a higher expectation and prefer even higher incomes. Fortunately, the median household income in the US was $52,762 as of 2011. The overwhelming majority of Americans are not only in the "top 1% of the world", we're far above the threshold. Obviously more than that is better, especially for families, but that wasn't the point of the ad - the point of the video is that we can look around the world and see how clearly prosperity is correlated to economic freedom, and how America's ranking has fallen dramatically in the last 15 years.

Either way, the whole article is framed as some kind of skeptical challenge, but it presents no actual challenge at all. Odd, huh?

Then the discussion turns again towards Minimum Wage - which is not only not mentioned in the video - but which Think Progress is just flat-out wrong about when they promote it as some panacea for improving the lives of working people. Charles Koch is correct, and they are not. Miminum Wage HURTS poor people by denying them opportunities to work.

I've covered this a zillion times in a zillion forums, including this one - when 5 years ago I presented 50 years worth of journal articles in a blog titled: "Minimum Wage: 50 Years of Fail"

Empirical data clearly and repeatedly shows that minimum wage increases correspond to lower levels of employment, reduced payroll hours, and other depressive consequences that predominately affect the least skilled, youngest and poorest people in our society.

The only study that actively countermands this is one by David Card and Alan Krueger (who you might remember as part of the Obama administration) and although it's widely discussed, it's a study that has been thoroughly refuted and was methodologically flawed from the outset.

As my buddy, Antony Davies who teaches economics at Duquesne University in Pittsburgh, noted:


"What non-economists are often unaware of is that the Card-Krueger study didn't look at employment among minimum wage workers. It looked at managers' intentions and recollections about employment. A follow-up study (published in the same journal) by Neumark and Wascher duplicated Card and Krueger's study using the same population, and the same techniques. But, instead of asking managers what they intended (or remembered) doing in response to the minimum wage change, Neumark and Wascher looked at actual payroll data.

They found what economic theory predicts -- the increase in the minimum wage resulted in unemployment among minimum wage workers."

Furthermore, this isn't even an area where there's much internal disagreement among the economics profession. According to Greg Mankiw (who wrote what is literally the most widely used college economics textbook in the world), across many polls of the profession, studies have shown that 79% of economists agree with the following statement:


"A minimum wage increases unemployment among young and unskilled workers."

That's not to say that the consensus is guaranteed to be right, but c'mon. The theory is sound, the evidence supports it, and the overwhelming majority of economists agree that Minimum Wage increases unemployment rates.

So, I mean... If what you want to do is hurt poor people by reducing their opportunities, then by all means - go ahead and follow the advice of Think Progress.

Anyway, the bigger problems here are that journalists and pundits write about this stuff using insinuation, bad logic and lazily connect ideas that are actually unrelated. CKI's video is about America's trajectory in economic freedom and it uses an international comparison because, well... that's the whole point! As the government increasingly controls more and more of our economy, we can look to other parts of the world and see the consequences.

So maybe we could have a conversation about that, instead of constantly promoting ancient and long discredited fallacies of folk economics and ginning up fear of the dreaded "rich guy"? Huh HuffPo? How about it?
Posted by Sean W. Malone at Thursday, July 18, 2013 1 comment: Links to this post