Once upon a time (by which I mean, 2009), I stumbled on a great essay by Georgetown Law Professor, Jonathan Hasnas that purported to describe what it feels like to be a libertarian. In it, he wrote:


"I’ll tell you. It feels bad. Being a libertarian means living with an almost unendurable level of frustration. It means being subject to unending scorn and derision despite being inevitably proven correct by events. How does it feel to be a libertarian? Imagine what the internal life of Cassandra must have been and you will have a pretty good idea."

Hasnas goes on to say...


"Libertarians spend their lives accurately predicting the future effects of government policy. Their predictions are accurate because they are derived from Hayek’s insights into the limitations of human knowledge, from the recognition that the people who comprise the government respond to incentives just like anyone else and are not magically transformed to selfless agents of the good merely by accepting government employment, from the awareness that for government to provide a benefit to some, it must first take it from others, and from the knowledge that politicians cannot repeal the laws of economics. For the same reason, their predictions are usually negative and utterly inconsistent with the utopian wishful-thinking that lies at the heart of virtually all contemporary political advocacy. And because no one likes to hear that he cannot have his cake and eat it too or be told that his good intentions cannot be translated into reality either by waving a magic wand or by passing legislation, these predictions are greeted not merely with disbelief, but with derision.

It is human nature to want to shoot the messenger bearing unwelcome tidings. And so, for the sin of continually pointing out that the emperor has no clothes, libertarians are attacked as heartless bastards devoid of compassion for the less fortunate, despicable flacks for the rich or for business interests, unthinking dogmatists who place blind faith in the free market, or, at best, members of the lunatic fringe.

Cassandra’s curse was to always tell the truth about the future, but never be believed. If you add to that curse that she would be ridiculed, derided, and shunned for making her predictions, you have a pretty fair approximation of what it feels like to be a libertarian."

I've long known Hasnas' frustration. I feel it day in and day out. 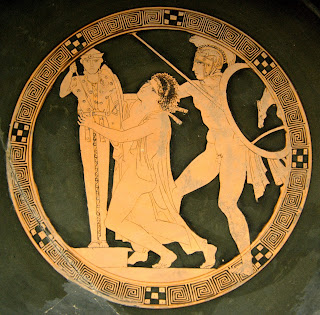 And lately, with the flood of people losing the insurance coverage they used to have and being forced into dramatically higher insurance plans or onto the mostly non-functional government-created and subsidized "exchanges", this frustration is starting to boil over. I want to scream at people sometimes. Because starting way back in 2007-2008, when people started getting really excited about so-called health care "reform", I started writing and debating about that issue with anyone and everyone, and did so through the passage of the Patient Protection and Affordable Care Act.

Search this blog for "Healthcare", and you'll find a trove of essays and articles, most of them complete with citations and links to supporting documentation and economic arguments.

I've done my best to be fair, and to present the opposing case as accurately as I could, and I've stayed away from sensationalizing the issue or talking unnecessarily about "death panels" or "socialism" in the crass sense. I don't even like using the term "ObamaCare".

I'm not that kind of a thinker or a writer. I never have been.

But I have been sounding the alarm against what should have always been the perfectly obvious consequences of the legislation for years. And now many of those consequences are here biting people in the ass. Millions of people are losing their insurance coverage, which is a predictable consequence of a law that made their existing policies illegal to sell or buy.

The PPACA created conditions where people who were voluntarily selling a particular set of health care insurance coverage at a price other people were voluntarily willing to pay were no longer allowed to do so. The politicians - Obama, Pelosi, Baucus, and everyone else - implicitly claim that they know better than those people.

The buyers were stupid. The sellers: Immoral.

Voluntary exchange be damned, Americans weren't wise or smart enough to make their own choices in an already severely restricted and government-controlled insurance market. The little bit of choice they had left had to be taken away... For their own good. At least that's the sales pitch when stripped of it's doublespeak. 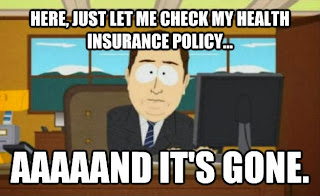 Now Obama is sad. He's "sorry" that millions of people have been losing their insurance plans. Not sorry enough to admit fault, of course, but certainly sorry enough to lay out some new platitudes about how unfortunate this all is and level yet another populist bromide against those awful, mean insurance companies. It's their fault, don't you know?

It's not the fault of the law that literally made the more affordable plans they'd offered illegal and forced them to create new - compliant - plans that had to cover dozens more treatments, throw out all sane actuarial models, and cover people who we already knew were going to be extremely costly to the other members of the insurance pool.

None of that could possibly have made insurance less affordable, even though anyone who can do a tiny bit of arithmetic might have realized it would.

And of course, the fact that the law also requires people to buy these expensive health care plans or pay a fine couldn't possibly increase the demand for services, which even a cursory understanding of economics suggests would increase the price. That is, unless the supply of health care services went up as well, but thanks to new taxes on medical technology, heavy handed regulations on producers of medical services, and no actually positive incentives for health care providers to join the industry... the supply of health care technology and services is just going down.

Really, guys. It's not that hard. I promise.

And that brings me to the title of this post. "Let's just wait and see what happens" is the incessant refrain from people who have absolutely no counter argument to reality, but who desperately - and from what I can tell, purely partisan reasons - cannot bring themselves to believe that the utopian policy promises their favorite politicians have made won't come true.

Obama is an upstanding, smart man. He's charismatic. He's well-meaning. The goal of making sure as many people as possible in America can get whatever health care they need to stay in tip-top shape is noble, right? Promises were made and they sounded good.

But that's not how reality works.

The problem is, instead of addressing the counter-arguments sufficiently (if at all), and instead of observing the data rolling in that's right in front of your face, you say, "Hey, man, let's just wait and see what happens!"

Let's just keep pushing out the timeline. Eventually things will turn around, and the reality that you don't want to be true will - from nothing but wishful thinking - stop being true. And it's not just about this issue. It's been the same thing over and over, throughout the past several years.

Cash for Clunkers won't stimulate the economy, you say? "Wait and see what happens." Oh. Ok... Fine, let's wait around to find out that, yep, it was worthless. See the Washington Post:


"But, as it turns out, the critics were on to something. A new analysis from the Brookings Institution's Ted Gayer and Emily Parker found that the program was fairly inefficient as economic stimulus and mostly pulled forward auto sales that would have happened anyway. It also cut greenhouse-gas emissions a bit — the equivalent of taking up to 5 million cars off the road for a year — but at a steep cost."

What about the auto bailouts? "Just wait and see what happens, man." Waited... And what do we find? Yet again, costs grossly outweigh the benefits. Cato and others have done excellent analysis on this point.


"Any verdict on the auto bailouts must take into account, among other things, the illegal diversion of TARP funds, the forced transfer of assets from shareholders and debt-holders to pensioners and their union; the higher-risk premiums consequently built into U.S. corporate debt; the costs of denying Ford and the other more worthy automakers the spoils of competition; the costs of insulating irresponsible actors, such as the autoworkers’ union, from the outcomes of an apolitical bankruptcy proceeding; the diminution of U.S. moral authority to counsel foreign governments against market interventions; and the lingering uncertainty about policy that pervades the business environment to this day."

...and don't forget about the $55 billion hit American taxpayers are taking on that "investment" as well.

What about government "investments" to help other key industries like energy? We waited and found Solyndra, They failed and cost taxpayers millions with nothing to show for them.

What about minimum wage hikes? Again, we wait, and they raise unemployment rates, lower hours worked by part-time workers, and generally price the most vulnerable people in society right out of the labor market.

What about bank bailouts and general stimulus packages? Didn't they save the economy? Sure... If by "save", you mean prolong the pain for 5+ years and set us up for even bigger financial problems in the future, yeah.

Each time someone tells me that we should just "wait and see what happens", they're ignoring what has happened repeatedly throughout recorded economic history and they're ignoring the arguments actually being made that explain why their genius plans are doomed to fail. So they fall back on this position of ignorance, like we just can't know or even make an educated guess about what will happen. Logic and evidence is irrelevant when your vision is unconstrained by reality.

I'm tired of it. I'm exhausted and frustrated. It doesn't feel good at all to say "I told you so", when what I told you was that millions of people would be harmed by the policy you support.

I don't want to see millions of people hurt by other people's stupidity anymore.

Sadly, it's only the tip of the iceberg on the harm coming from insane policies that have only been expanded and strengthened over the past several years. Spending most of your life watching a train-wreck unfold that no one bothers to understand well enough to stop, even though you're screaming at the top of your lungs telling them to avoid the pain, takes a toll.